Today we have a guest post from Pat Jackson who is a bilingual RN who travels to Peru each year with Global Health Ministry. We're sharing Pat's story! Without further hesitation here is Pat's story in her own words!


"Hi there, Pat Jackson here. I'm a bilingual RN and in 3 weeks I leave for Peru, a medical mission trip with Global Health Ministry that I've been doing for ten or so years now. It's an expensive endeavor and I stumbled upon a fundraiser that has really worked...The Great Tomato Sale. (I'm an RN, but a master gardener also, so why not combine these talents?)

The first year was serendipitous...I was teaching a seed-starting class, and included some of my own in the greenhouse, along with the students'. But when 100 tomato plants "took," I wondered what I'd do with them. Ran to St. Francis Hospital, my then-employer, who is affiliated with Global Health Ministry. The plants sold out in an hour. The next year, I tried for 200 and it was a hit.

Well, I moved north to Vermont, had no greenhouse at my disposal, but continued this mission trip. How would I pull this off? So I called my good friend, HG Haskell, and presented my dilemma. His only question: "how many plants do you need?" And I had the nerve to request 300! Since then, he has been supplying me with the crux of my fundraising for this 2-week trip to Chulucanas, Peru. Amazing!

GHM has two trips to Peru: one in June for Primary Care where many of us travel 5-6 hours up into the mountains, offering care to folks who may only see a doctor -- us -- once a year! We also triage the patients for the October surgery trip where at least 200 surgeries are performed in two weeks, 3 surgical rooms running non-stop. All our services are free. Without this most of these patients would never receive care.

So, my mantra is: "great tomatoes here, free healthcare there." Can't go wrong, right? What a guy, that HG.

We thank Pat for sharing her story and doing the amazing work she's doing! Keep it up, Pat!!
Posted by Anne Steelman at 1:07 PM No comments:

Email ThisBlogThis!Share to TwitterShare to FacebookShare to Pinterest
Labels: Events on the Farm, Tomatoes

A scare with the cold...

An unexpected cold snap in May!

Last night called for frost and that put everyone on edge at the farm. So many varieties of vegetables have been planted in the fields already this season. HG and the team have planted tomatoes, eggplant, peas, squash, green beans and corn in the fields thus far this season.


A frost could mean significant lose due to frost damage. It doesn't take much cold to kill a plant depending on it's hardiness. Most of the early vegetables that we've planted aren't hardy plants. They're also still young so don't have much strength to fight against the cold. It isn't so much the cold temperatures but frost that causes the most irreversible damage. Frost is actually what can damage the plants. A light frost, like we had last night, doesn't cause as much detrimental damage as a hard frost. HG and the team took to protecting the precious vegetables in the fields. Last night they were out covering the crops with row cover to help insulate and keep the plants warmer then the outside air temp. A few degrees could make or break the harvest potential of the crops. The row cover helps keep the temperature up a few degrees to protect the plants.


Since we're talking about all these delicious vegetables, we might as well mention the CSA as well. We are still accepting enrollments in the CSA until June 1st! The CSA is a great way to plan your meals around the surprises in your share of the week. Email us at siwveggies@gmail.com for more information!


Posted by Anne Steelman at 8:57 AM No comments:

We're getting closer and closer to opening day and we couldn't be more excited!


Opening day is June 1st and we're well on our way getting things ready around the farm. The greenhouse has been busy and bursting at the seams (see those updates here and here).

Some of our favorite veggies are in the fields and coming along nicely. We can't wait to taste those delicious tomatoes, have a fresh ear of corn or enjoy some delicious peas! We're so excited we're already contemplating our summer dinner menus.

With opening day fast approaching, we're getting excited about all the upcoming events on the farm. Don't forget to check the calendar for our Field to Fork Dinners. We also have the Annual Farm Tour coming up on June 16th. Don't forget we also are hosting a Wild Edibles Walk with Nathaniel Whitmore, you can read more about that here.

What are you excited for this summer?

Posted by Anne Steelman at 9:30 AM No comments:

The plants are on their way!


SIW is on their way to Wilmington to drop off flower and veggie starts to be sold this weekend at the The Wilmington Flower Market. We've grown eggplant, peppers, cucumbers, tomatoes and more to send to the market this weekend! 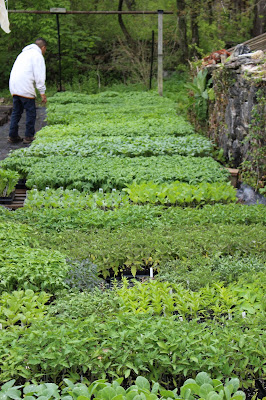 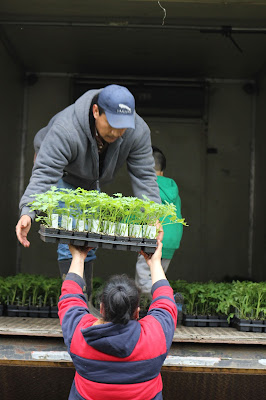 If you haven't heard of this amazing event, we'll share some more details. This event happens every year on Mother's Day weekend (Thursday-Saturday) and is fun for the whole family. There is a large selection of plants and flowers for your garden, as well as for sale. Need a last minute Mother's Day present??? There is also live music performed on the WDEL stage, as well as an amazing spread of delicious food. We can't forget about the kiddos either, there are carnival rides and games for them to enjoy!There are a few events leading up to the actual weekend as well! Tonight WFM Rocks the Park! They'll be kicking off the weekend with live music from 5-8pm tonight! The market is open Thursday and Friday 10am-8pm and Saturday 10am-7pm.


We're so happy to be a part of this amazing event again. The Wilmington Flower Market has been helping children since 1921. Wilmington Flower Market Inc. is a tradition, a corporation and an all volunteer fundraising organization dedicated to improving the lives of Delaware’s children. If you're looking for something to do this weekend, the perfect gift for Mom or just want to find the perfect addition for your garden, get out and support the WFM!
Posted by Anne Steelman at 11:07 AM 1 comment:

We wrapped up our second Crop Mob of the 2016 season on Saturday, April 30. We weren't sure of the weather at the the start of the morning but the sun came out and warmed us up. It turned out to be a wonderful day!

A few tasks were added to the to do list of the day. The volunteers were split into groups and sent on their way into the fields. The first task on the list was to clean up the raspberries! The raspberry canes were trimmed and all the leftover debris needed to be removed from the rows of canes. Did you know that a raspberry plant is called a cane?

Another group of volunteers were sent over to the corn that had previously been planted in the field. The corn has been in the ground for a bit now. You can see the corn under it's big blanket on our Instagram feed when it was first planted. Good news, the blanket did it's job! The corn sprouted and began touching the "blanket". This means the hoops needed to be added to the rows to lift the row cover off the crops. The corn is still young yet so still needs the protection of the row cover. The volunteers did a great job of adding the hoops and recovering the corn!

The last task on the list of the morning was to plant more sweet onions! The sweet onions have been in the ground for a few weeks now. Sometimes the seedlings don't take and need to be replanted. The volunteers went down the rows of onions looking for any empty holes to place a new seedling.

The tasks of the morning definitely give us an appreciation for the hard work that goes into providing the food for our tables! The tasks were completed just in time for lunch! We gathered for a group photo and then dived into a delicious lunch made by Talula's Table! A HUGE thank you to the Delaware Center for Horticulture and the volunteers that helped us! 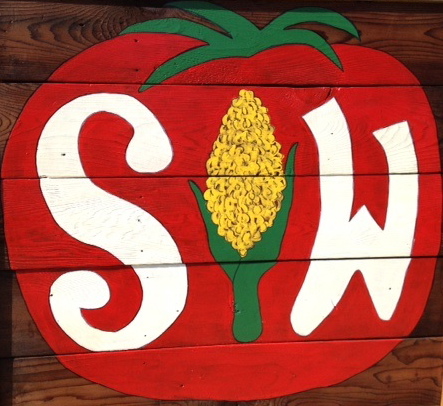 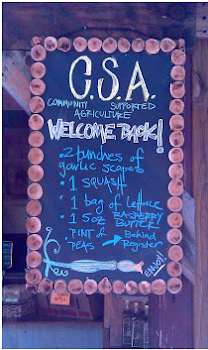